The following information on the proposed Domain 1 MPA (D1MPA) was provided by Argentina:

Domain 1 comprises the Western Antarctic Peninsula and South of the Scotia Arc. This area is subject to on-going environmental changes and it holds the largest krill fishery in the Southern Ocean.

The D1MPA preliminary proposal was first introduced for discussion during the 2017 meeting of the Scientific Committee (SC-CAMLR-XXXVI/17 and 18) and described Priority Areas for conservation based on 143 spatial data layers. During this meeting, the Scientific Committee established the D1MPA Expert Group, formed by Members and Observers (including NGOs and the fishing industry), to allow stakeholders to comment on the proposal intersessionally (SC-CCAMLR-XXXVI/19).

The current D1MPA model (CCAMLR-39/08 Rev. 1 | CCAMLR) has an extension of approximately 670,000 km2 comprising two different management zones: the General Protection Zone (GPZ) and the Krill Fishery Zone (KFZ), where over 60% of the MPA is protected as part of the GPZ. These zones would be established to achieve different conservation objectives. The D1MPA model would contribute to the protection of Antarctic krill nurseries; important areas for fish species that were overexploited in the past, and for early stages of Dissosthicus mawsoni.  It will also protect the feeding areas of emperor and pygoscelids penguins, seals and whales. Lastly, it will protect benthic and pelagic bioregions and areas of high productivity such as the polynyas margins.

Discussions regarding the proposal to establish the D1MPA are on-going. 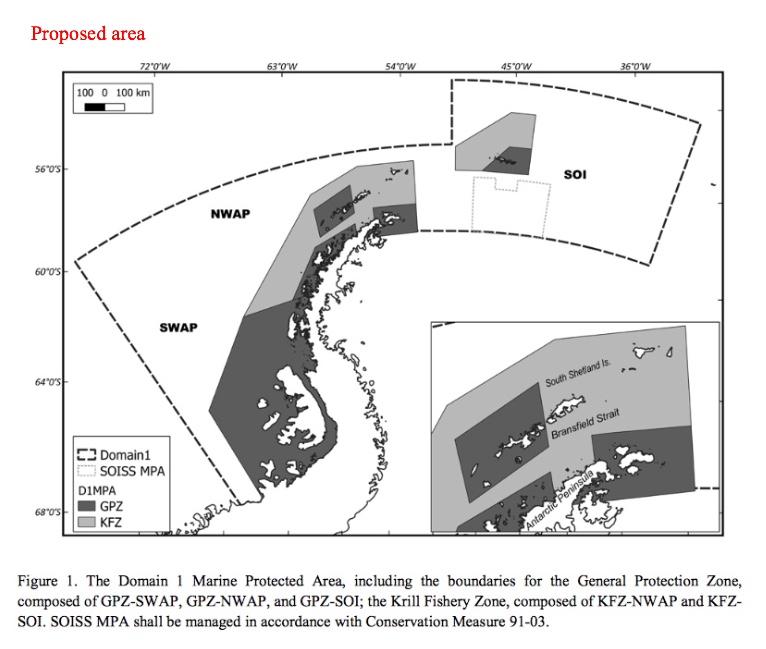